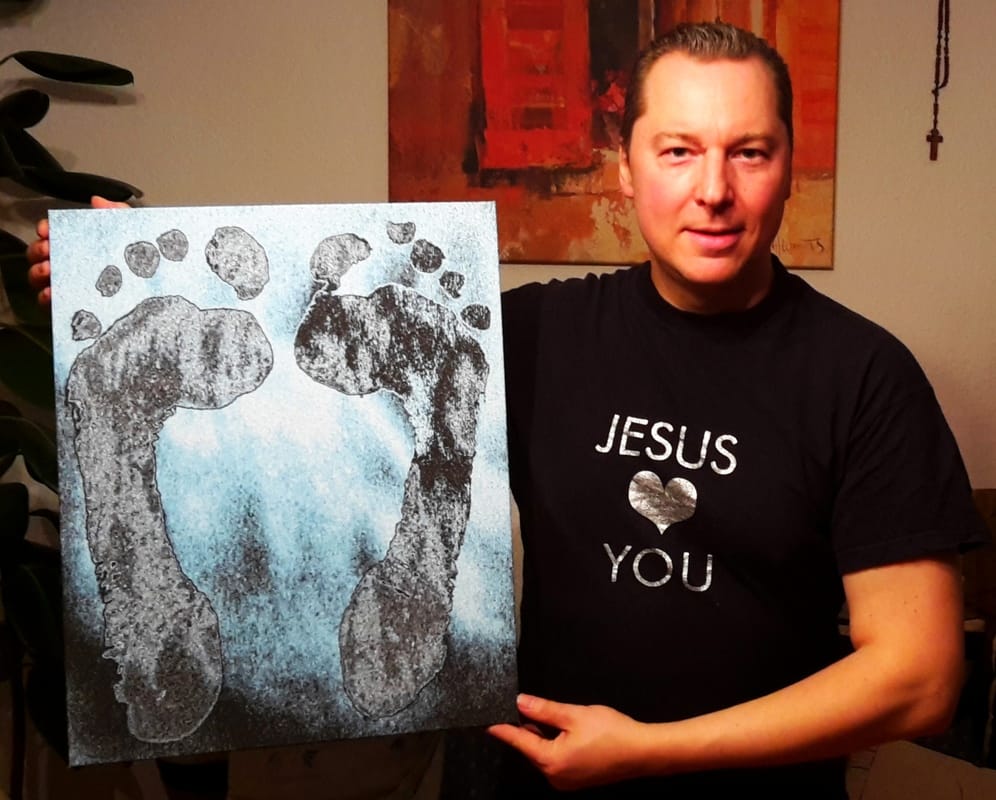 RelicArt - Art with real parts of the Shroud of Turin

"When Jesus spoke again to the people, he said,
“I am the light of the world.
Whoever follows me will never walk in darkness,
but will have the light of life.” "
John 8,12 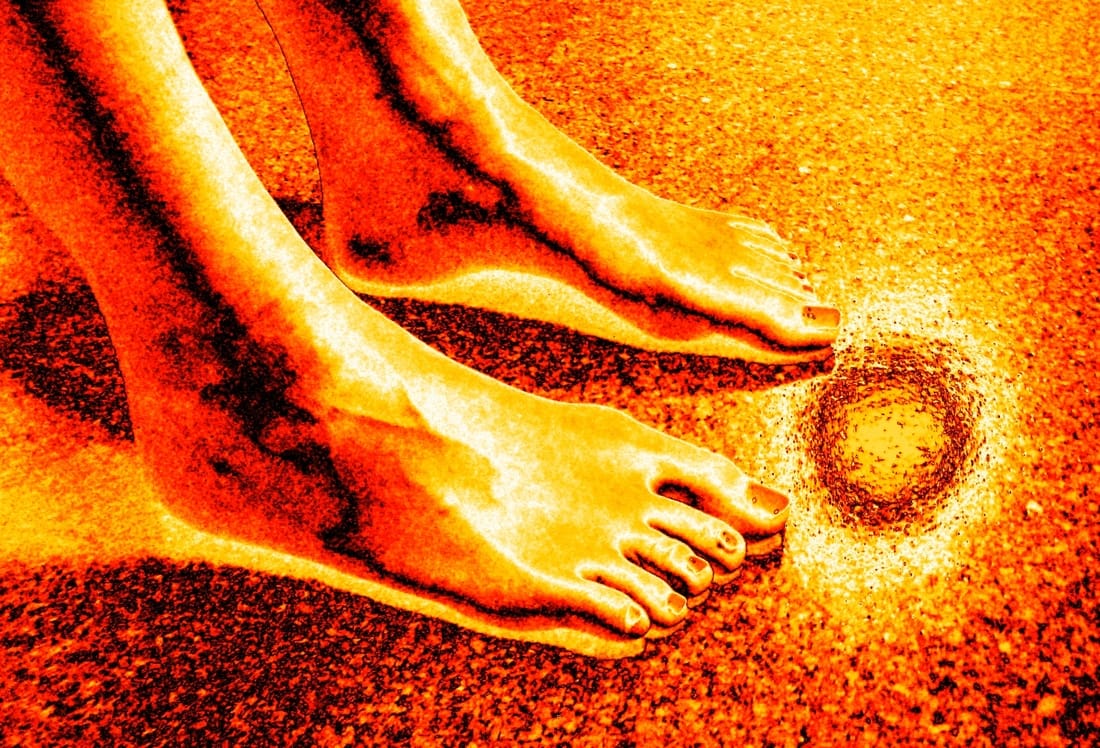 The Shroud of Turin
​is radiating a very special energy

It is the shroud in which Jesus Christ was wrapped in the tomb when he resurrected from dead.
There has been a lot of scientific researches and till today science is not able to explain how the picture of Jesus occurred on the shroud. And with all the technology we have available today it is still impossible for us to create an image like this.
The image was created by an energy that is still not understood by science but mentioned in the bible:

This light of life is real. When Jesus resurrected, this most powerful light radiated from his body and created an amazing image of him on his burial cloth.
Jesus entire body can be seen best with a negative of the the picture of the shroud.

Every piece of the Shroud is radiating this powerful energy.

Many million people visit the Shroud of Turin when it is exhibited for some few days every century.
And even if it is for the most people only very few seconds that they have close to the shroud, still it changes the whole life of many.

For this reason Pope Clement XII and Pope Benedict XIV started a very special project in the 18th century.

They extracted parts of the Shroud of Turin (top left and right corner) to spread them all over the world to make the Shroud and its energy available to mankind. 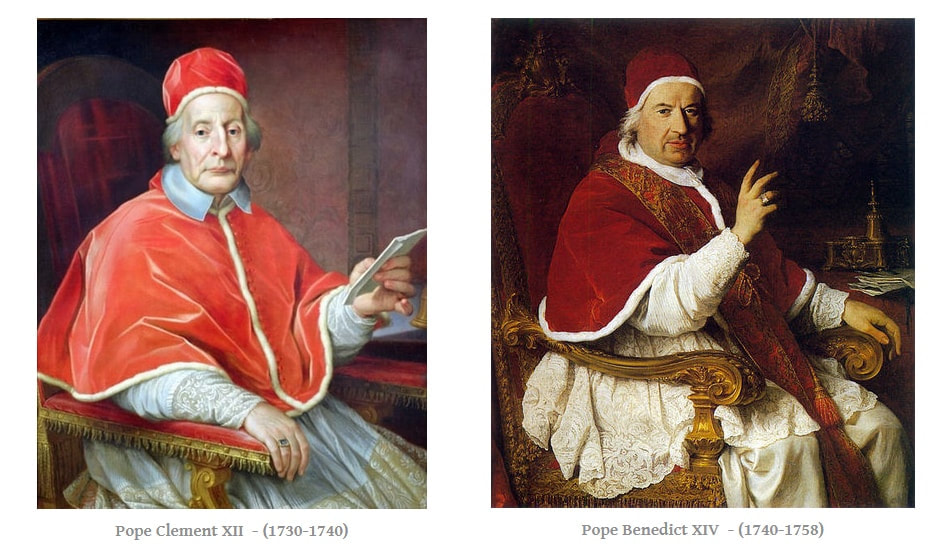 Already in the bible we read how the divine energy was transported to people through cloth charged with this energy:
“God did extraordinary miracles through Paul, so that even handkerchiefs and aprons that had touched him were taken to the sick, and their illnesses were cured and the evil spirits left them.”
Act 19,11-12

And of course the cloth that Jesus carried on his body is highly charged with energy:
“Just then a woman who had been subject to bleeding for twelve years came up behind him and touched the edge of his cloak. She said to herself, “If I only touch his cloak, I will be healed.”
Mt 9,20-21

And indeed after she touched the cloth of Jesus she has been healed.

But we need to be aware that this happened while Jesus was walking through a crowd and many touched his cloth.
“At once Jesus realized that power had gone out from him. He turned around in the crowd and asked, “Who touched my clothes?” “You see the people crowding against you,” his disciples answered, “and yet you can ask, ‘Who touched me?’ ”
But Jesus kept looking around to see who had done it. Then the woman, knowing what had happened to her, came and fell at his feet and, trembling with fear, told him the whole truth. He said to her, “Daughter, your faith has healed you. Go in peace and be freed from your suffering.” ”
Mark 5,31-34

This is teaching us that to access this energy in full power we need to open up ourselves in faith.
This is possible through the JESUS YOGA MEDITATION.
This meditation that was already practiced and taught by Jesus and the apostles, can open a person. And when we are open to receive, the energy will flow. 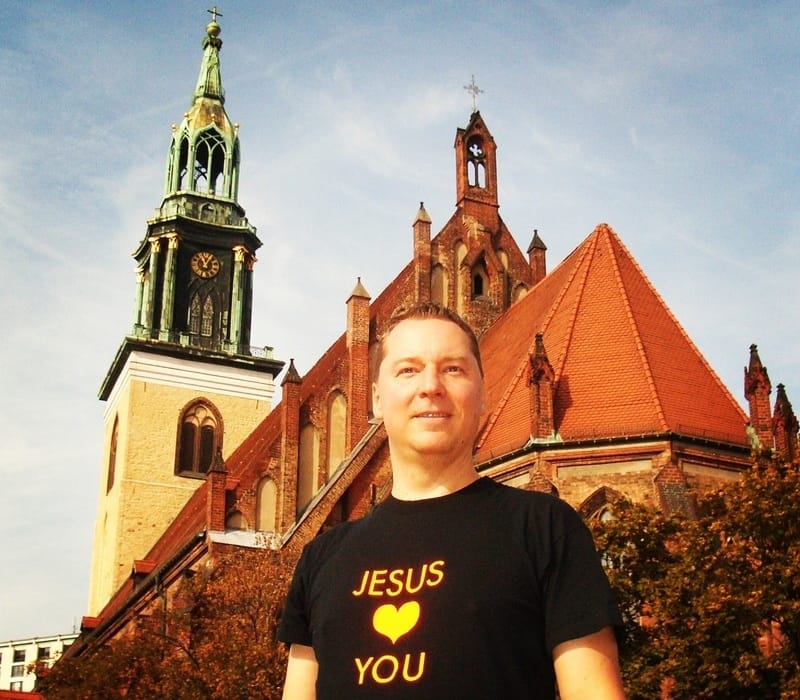 I received parts of the Shroud of Turin
and now I continue the great project of this two popes.

Here are certificates of authenticity for more relics used in this project issued through the Roman Catholic Church: 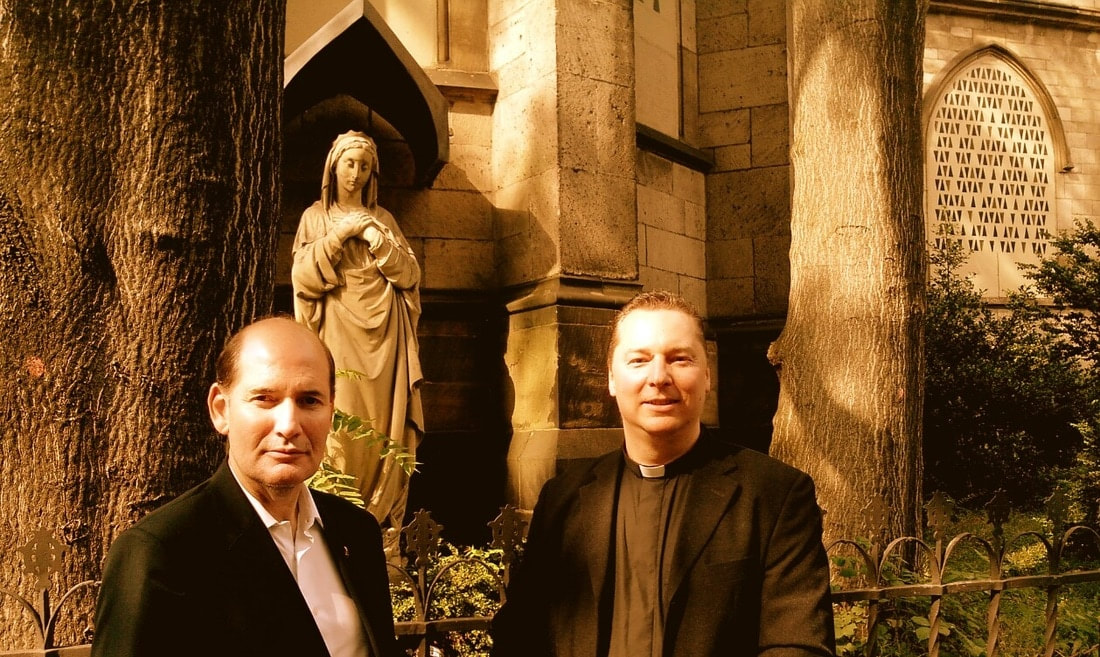 Pope Francis bestowed the apostolic blessing on me: 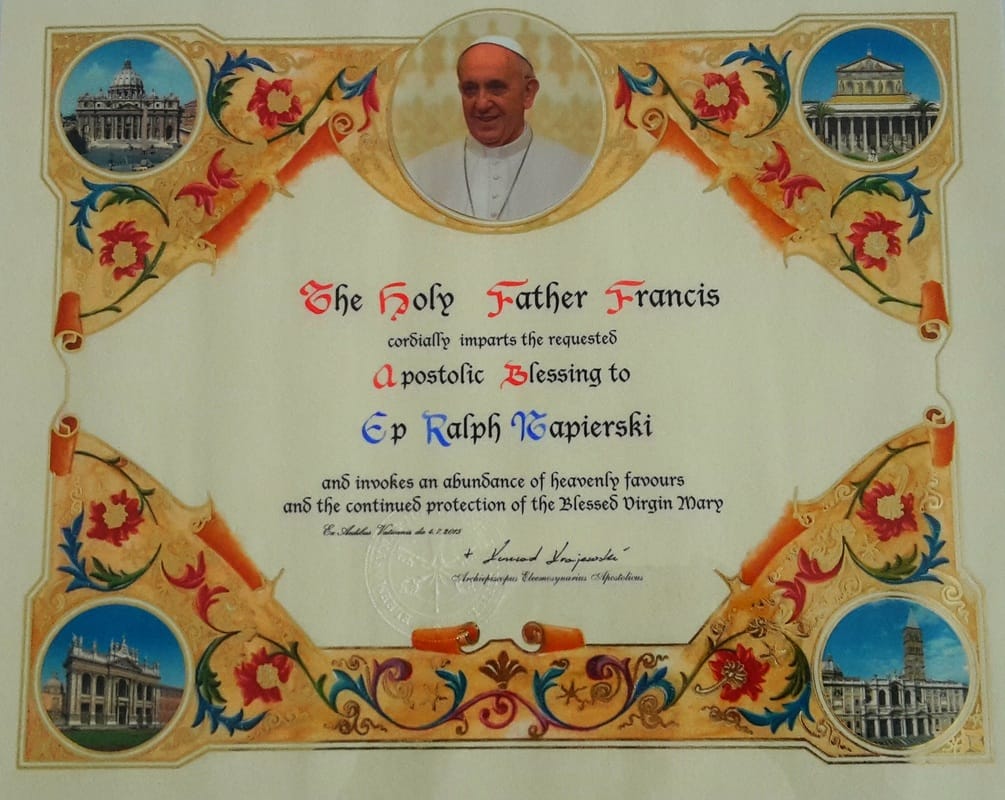 To create the artworks I use the feet of very special women.

“How beautiful are the feet of those who bring good news!”
Romans 10,15 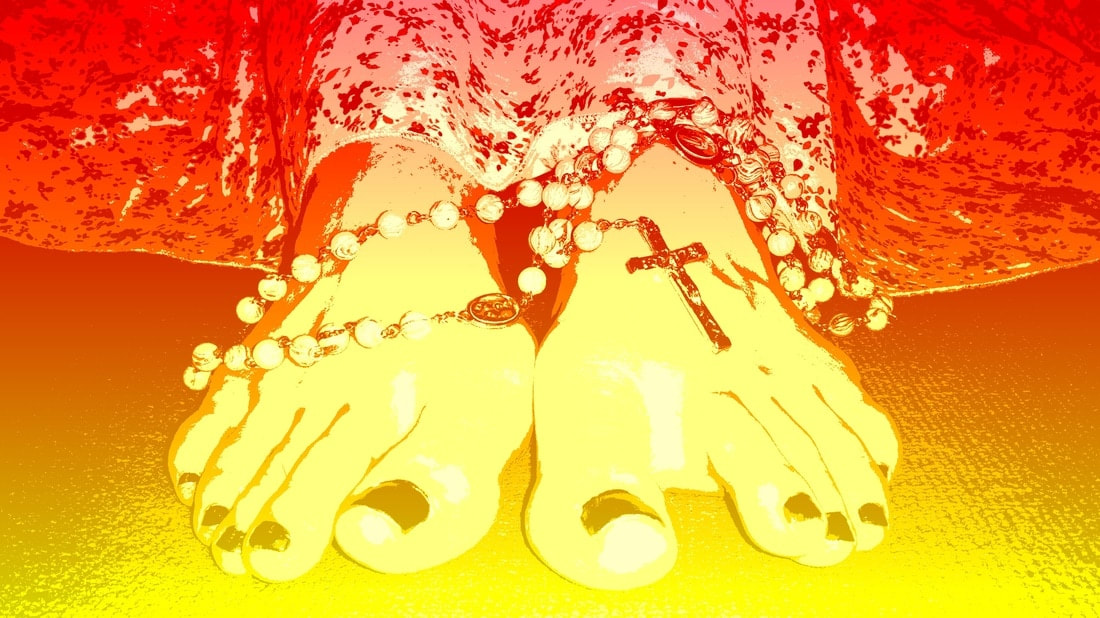 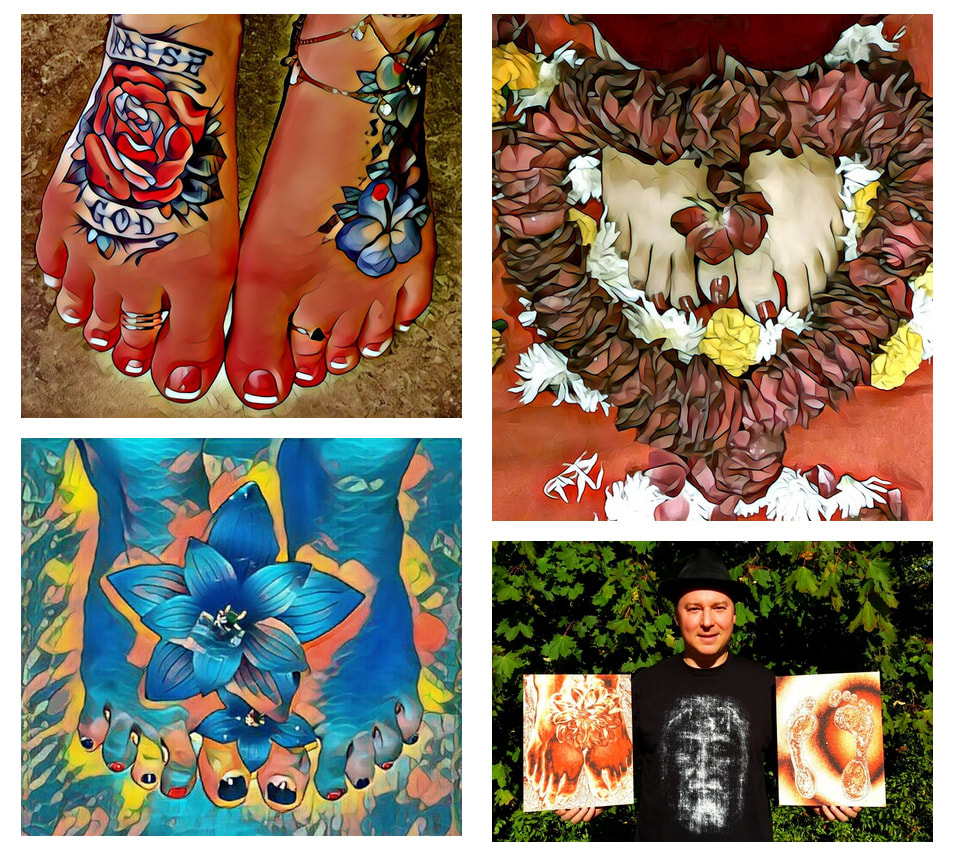 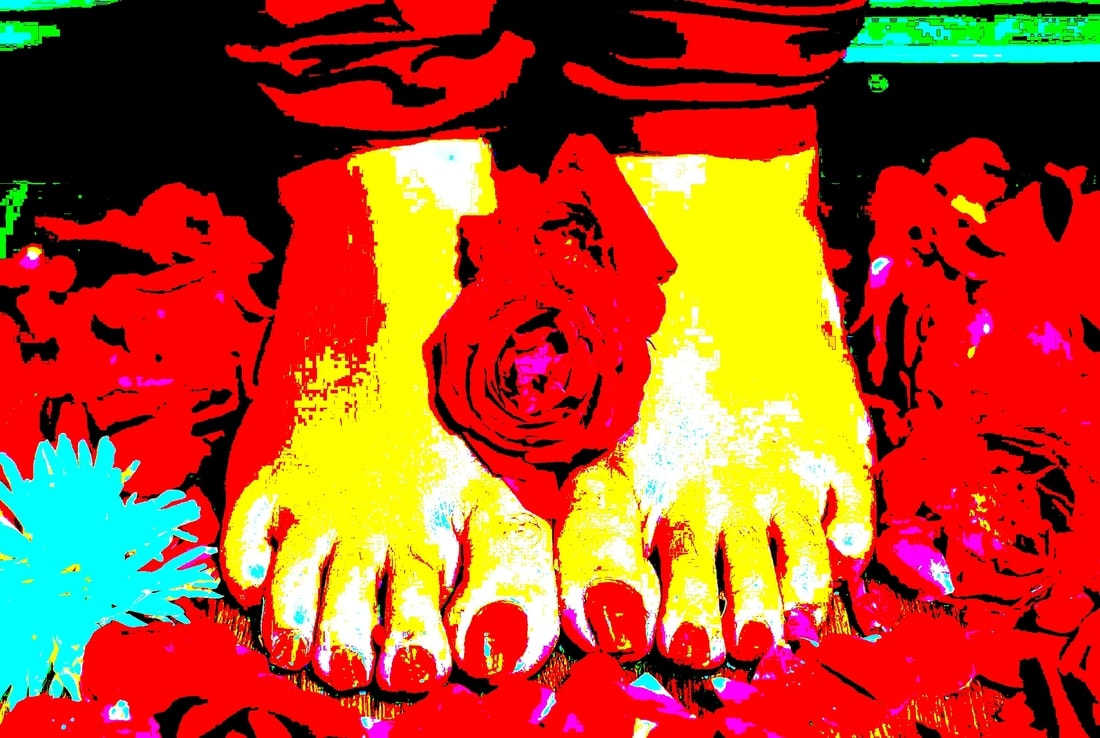 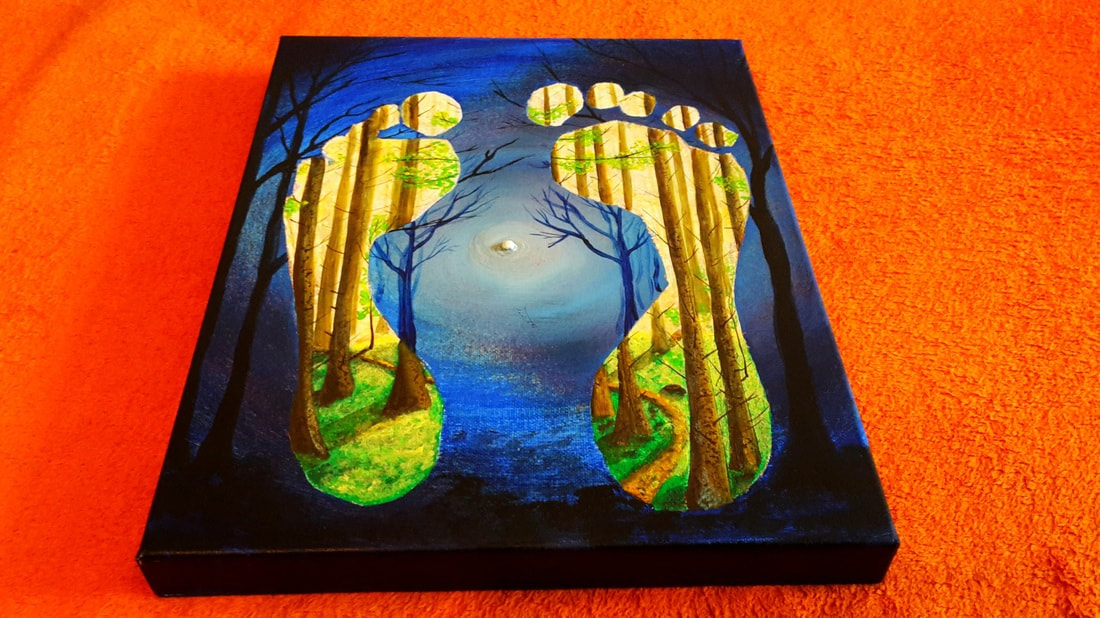 You can find ore artworks in the
>> GALLERY <<